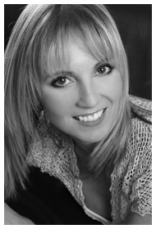 Tina trained locally at the 'San Toy' school of dance until the age of sixteen. She successfully auditioned for the prestigious 'Laine Theatre Arts College' and went on to train there for a further three years.

She was appointed head girl during her final year and was then offered a teaching position by Miss Laine. After a year of teaching at the college she then travelled to Canada and spent six years training dancers and teachers in the I.S.T.D and Cecchetti methods of dance. She became the area co-ordinator for the modern and tap exams as well as choreographing for many shows and professional pantomimes.

In the summer of 1995 Tina returned to England and became a freelance teacher for many well-established schools including a full time dance college and a school for children with special needs. Her qualifications include four Associates, two Diplomas and a Licentiate in Tap. Over the past thirty years she has had a 100% pass rate with the pupil's exams. Tina teaches all of the modern and tap at the school. Achieving her final ambition was to own her own school which opened its doors for the first time in September 1997.

Tina has had the honour of being selected to teach at the I.S.T.D in London with pupils from her school and also supplies them with children for major exams. Some of the pupils have performed at the 'Shaftesbury Theatre' in London's West End. The school has gone from strength to strength and continues to operate in a friendly environment.

Get In Touch With Us